Waiting at the bus stop, I saw Bahadur Shah Zafar (1775-1862) staring at me through vicissitude of time and space. The deposed Mughal emperor lived tragically; striped of power, prowess and prestige. Zafar’s influence was circumscribed within the walls of the Red Fort. He lived to see the murder of his two sons and family. The last gasp of of Mughal empire was also the golden age of Urdu poetry. Zafar’s court included some of Urdu’s most influential poets including : Mirza Ashudallah Khan Ghalib (1797-1869), Momin Khan Momin (1800-1851) and Muhammad Ibrahim Zauq (1789–1854)–who was also Zafar’s poetic mentor. Zafar was deposed by the British for complacency in the Rebellion of 1857 and exiled to Rangoon (in modern day Burma).  The British brutally suppressed the uprising, some estimates put the total death count in the millions. 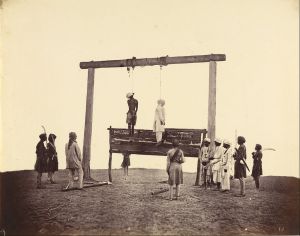 The hanging of two participants in the Indian Rebellion, Sepoys of the 31st Native Infantry. Albumen silver print by Felice Beato, 1857 (wikipedia)

The world at times conforms to poetic reality and Bahadur Shah Zafar is found peering through a bus stop window–in Northern New Jersey. I had been reading Zafar’s poetry the last few months. This was a crazy coincidence–what are the chances? A picture of Zafar taken right after his trial in 1857, before his exile to Rangoon–with a caption “One More Hit.”  Perhaps, the person who plastered this picture was unaware of who Zafar was. 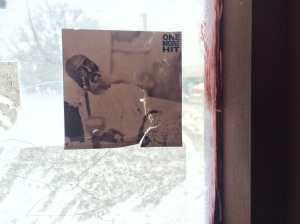 Looking at the picture  (strangely) did not remind me of verse by Zafar but of Walt Whitman (1819-1862). I was commuting into Whitman’s old stomping grounds, Manhattan.  In the second edition of Leaves of Grass published in 1856 Whitman included a new poem : Crossing Brooklen Fair. Where he speaks to his further reader, I con’t help but see Zafar through Whitman’s eyes. Whitman writing in Brooklen and Zafar in Deli one perceiving his immortality, the other lamenting his ephemeral reality.

in Crossing Brooklen Fair had written: ***

Zafar : Not The Light of Any One’s Eyes 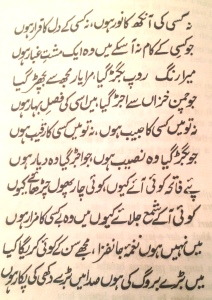 *** I think of Zafar, poet and Emperor, being led through this street by British soldiers, his feet in chains, to watch his sons hanged. In exile he wrote: “Unfortunate Zafar spent half his life in hope, the other half waiting. He begs for two yards of Delhi for burial.” He was exiled to Burma, buried in Rangoon. 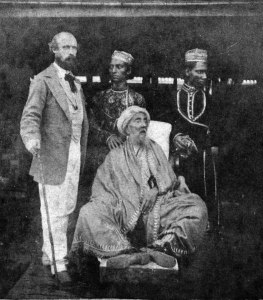